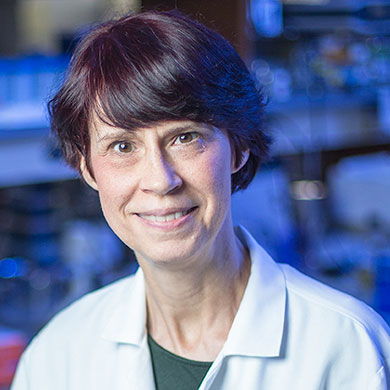 Hematopoiesis—the creation of new blood cells—is a highly dynamic process that requires a careful balance between cell division, differentiation, and cell death. In MDS, this process is disrupted, resulting in a decline in blood production, anemia and sometimes bone marrow failure. The two major modes of programmed cell death, apoptosis and necroptosis, share some molecular characteristics, but markedly diverge in outcome: apoptotic cells implode, whereas necroptotic cells explode, triggering inflammation that can affect blood cell creation. While genetic studies have identified two proteins that activate apoptosis and restrain necroptosis, it remains unclear why some cells die by apoptosis and others by necroptosis remain. Here we identify a protein that acts as a molecular switch in lab mice to determine cell death fate in hematopoiesis. The loss of this protein can lead to unrestrained necroptosis and inflammation leading to eventual bone marrow failure that closely resembles human MDS. Importantly, this process can be halted by treating the mice with Enbrel, providing proof of concept that inhibiting inflammation caused by necroptosis can impact the functioning of key cells in blood production.