EvansMDS, the primary medical funding initiative of the Edward P. Evans Foundation, is dedicated to finding cures for Myelodysplastic Syndromes (MDS)—a collection of rare but devastating types of blood cancer.

EvansMDS invests solely in the most promising, innovative, and high-impact MDS research being conducted today. To speed the pace of discovery, we streamline funding for scientists, and actively bring researchers together to forge new lines of communication and collaboration.

Together, the EvansMDS team helps promote the free exchange of innovative research ideas and develops a better understanding of the disease so that we might expand treatment options and improve outcomes for tens of thousands of patients diagnosed with the disease each year. Through our work, we honor the legacy of Mr. Evans, our founder, who himself battled MDS before his death in 2010.

Edward Parker Evans, our founder, was a passionate businessman and philanthropist who served as Chairman and CEO for a variety of companies, most notably the publishing giant, MacMillan Inc. Mr. Evans was also an avid horseman and owner of Spring Hill Farm, the largest horse breeding farm in Virginia—and one of the state’s most successful.

Myelodysplastic syndromes (MDS) are a variety of conditions that occur when bone marrow cells are damaged by cancerous mutations. Unlike many other cancers, these mutations don’t form solid tumors—rather, they affect the function of the bone marrow itself. 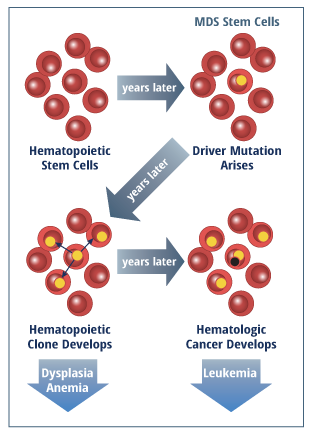 As diseased cells spread throughout the marrow, they slow the tissue’s ability to create healthy blood stem cells (“universal” parent cells that form into platelets, red blood cells, and white blood cells). As a result, a patients’ body has fewer and fewer viable blood cells in circulation, leading to anemia, lowered immune response, and an inability to form blood clots. Although the disease itself may not be directly fatal, patients with advanced MDS often succumb to infection or uncontrolled bleeding, and in roughly one-third of the cases, develop acute myeloid leukemia (AML), a severe and rapidly progressing type of blood cancer.

At the moment, the cause of the MDS—and the exact genetic pathway through which it forms—are unknown. The disease is not generally hereditary, however, and tends to appear in adults over 60, so researchers suspect it may be related to genetic mutations that accumulate over a lifetime. MDS is not limited to old age, however. Other forms of the disease, called “secondary MDS,” have well-documented environmental triggers. Long-term exposure to industrial toxins like benzene can lead to genetic abnormalities in bone marrow cells, as can radiation and chemotherapy used to treat other types of cancer. Ironically, the mutations created by these life-saving therapies can cause onset of MDS up to a decade after being administered.

Each year, more than 40,000 patients worldwide are diagnosed with MDS, although the number of patients suffering from it may be far higher. Older patients can harbor dangerous mutations asymptomatically, and since genetic testing is uncommon, the disease is extremely difficult to detect in its early stages. Once MDS progresses, the only cure that exists is a bone marrow transplant—a dangerous procedure that only works in about one-third of eligible cases, and is available predominantly to young, relatively healthy patients. Other than this extreme measure, the only treatment that can ease the symptoms of the disease are regular blood transfusions, which significantly lower patients’ quality of life.

With this in mind, it’s more imperative now than ever to understand the genetic and biochemical origins of MDS. Over the next several decades, the average life expectancy in the U.S. will continue to rise, leading to an older population, and a steady increase of patients suffering from the disease. New research may help not only MDS patients, but patients suffering from more common types of cancer. If we can establish how aging contributes to the development of these diseases, it may be possible to find new ways to treat or cure them before they advance.