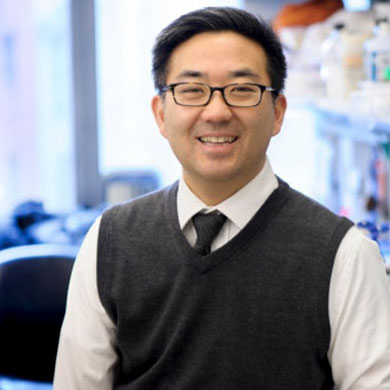 We are very excited about the progress in the second year of our EvansMDS grant “Single Cell Analysis of Myelodysplastic Syndrome (MDS) Stem Cells”. Our overall goal was to identify the genes that determine MDS patient responses to hypomethylating therapy as well as clinical outcomes. Last year, we reported completing single cell RNA-sequencing data generation from stem cells from both normal, age-matched controls and MDS patients who experienced worsening blood counts. As reported last year, our studies identified unique gene signatures that characterize MDS stem cells as well as alterations in gene splicing. This finding was surprising because alterations in gene expression and gene splicing were present even in cells from MDS patients who did not harbor a mutation in a splicing factor gene. This past year, we have been expanded upon this finding, leading to the identification of differentially spliced transcripts that may contribute to MDS development. Indeed, one of these genes, Spns3, was recently reported to be a candidate MDS gene by Dr. Hartmut Geiger’s group at this year’s EvansMDS Summit in New Haven. Thus, alterations in gene splicing – previously thought to be important only in a subset of MDS patients – may be more general mechanism of disease development than previously thought. We have also applied novel computational tools to identify gene expression changes that are unique to a subset of stem cells from MDS patients who did not respond to decitabine therapy, leading to the identification of novel candidate therapy resistance genes that we are now in the process of confirming. In the past year, we also expanded our studies to include patients experiencing one of the dreaded complications of MDS – progression to acute myeloid leukemia (AML). While analysis of these data is ongoing, our initial evaluation reveals a number of intriguing findings. First, stem cells from MDS patients who progress to AML appear to exhibit unique gene expression signatures as compared to MDS patients who experience worsening blood counts without transformation to AML. Second, blood stem cells from MDS patients show significant differences in gene expression from normal stem cells, regardless of the age group they are obtained from. Additional analyses will address whether HSCs from MDS patients who progress to AML exhibit differences in splicing or responses to decitabine therapy. We believe that these additional analyses will provide the comprehensive evaluation of MDS HSCs that we set out to accomplish at the outset of our award and will provide novel insights into the molecular mechanisms that determine MDS clinical courses and responses to decitabine therapy.