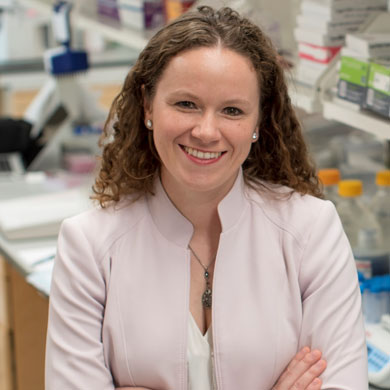 We have made tremendous progress in describing the genetic basis of human blood diseases, including myelodysplastic syndromes (MDS), with the advent of new technologies, such as next generation sequencing (NGS). However, we currently do not understand how most of the genes implicated in MDS development actually cause disease, and how to best target them with new therapies.

In this project, we will focus on a specific subtype of MDS, characterized by mutations in a protein complex called the cohesin complex. This complex forms a ring like structure around DNA and is very important for normal functions of every cell, including the process of copying and folding the genetic material inside of the nucleus of each cell. Furthermore, this complex is important for turning genes on and off. Using human patient derived cell lines that carry mutations in the cohesin complex, we have previously discovered that cohesin-mutant cells are unable to repair errors that occur in DNA when it is being copied or used as a master plan to make proteins. We would like to study how the defect in the function of this complex may contribute to how the disease develops as it progresses from clonal hematopoiesis to MDS, and what specific sources of DNA damage are at play. In addition, we will examine whether this defect makes cohesin mutant cells more sensitive to a combination of drugs that target DNA damage repair and methylation, which is tightly linked to genes being turned on and off.

Treatment options for patients with MDS are limited, and better understanding of the mechanisms by which MDS causing genes, such as cohesins, contribute to MDS and leukemia development in patients will inform the design of urgently needed new treatments. The impact of this work might also extend to patients with other blood cancers as well as patients with bladder cancer, glioblastoma, Ewing sarcoma and breast cancer, who are also frequently found to have abnormal copies of one of the cohesin genes.