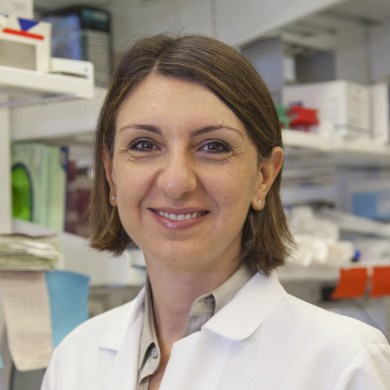 In recent years, we have come to appreciate that clonal hematopoiesis (CH), i.e. the presence of clonally expanded hematopoietic cells in the bone marrow and blood of healthy individuals, is a widespread phenomenon. CH increases in prevalence with age, such that around 20% of individuals of age 70 or higher have a sizeable clone in their blood, whereas with more sensitive detection some level of CH is found in almost every individual. Clonally expanded hematopoietic cells often harbor mutations in genes that regulate the epigenome. The presence of these mutations predisposes to myeloid malignancies, like Myelodysplastic syndrome (MDS) and acute myeloid leukemia (AML). However, while we now know that at least some cases of MDS and AML develop from a preexisting CH, with the epigenetic mutation being the initiating mutation, we do not understand the cellular and molecular events that underlie disease progression and cannot predict the individuals most at risk. Furthermore, important outstanding questions remain as to the value of therapeutic targeting of these early epigenetic events. Chemotherapy and most newly developed targeted therapies for MDS and AML (i.e. FLT3 inhibitors and IDH1/2 inhibitors) target mutations that are acquired late in the course of the disease. Because these are typically present in a subset and not all leukemic cells of the patient, their targeting cannot eliminate the leukemia and therefore patients relapse. There is therefore great interest in developing therapies targeting early mutational events in epigenetic modifiers under the assumption that these could eradicate all cells and result in lasting remissions or even cures. However, it is also possible that the evolved MDS and AML cells are no longer dependent upon the initiating mutation. Currently, the dependency of MDS and AML cells upon the initiating “epigenetic” mutation remains unclear.

This proposal harnesses unique genetic models developed in the Papapetrou lab to characterize the effects of CH mutations. Understanding the effects of CH mutations in epigenetic regulators offers an opportunity to understand the initiating processes of oncogenesis and would empower efforts to stratify patients with increased risk of developing MDS. As genetic testing of blood is now widespread, CH is increasingly being found in otherwise healthy individuals, who are being followed in newly minted CH clinics and whose risk of subsequently developing MDS varies widely. There is an urgent need to inform risk estimates of progression to myeloid malignancy and other morbidities in order to derive effective guidelines for the monitoring and counseling of these individuals and to ultimately, prevent MDS and AML development.