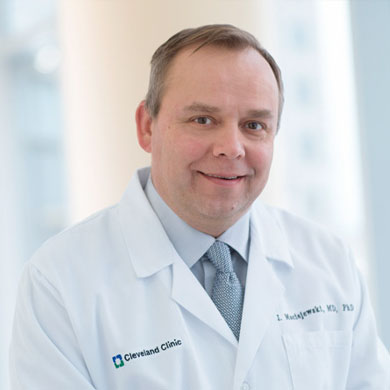 Myelodysplastic syndromes (MDS) are a group of diseases characterized by defects to the genetic material in bone marrow stem cells responsible for blood production. As a consequence, patients have low blood counts and develop leukemia. New genetic technologies have led to tremendous progress in the understanding of this disease and show that various genetic defects are present in this disease including breaks in chromosomes (cell structures in which genetic material is tightly packaged) and mutations which represent acquired discrete alterations in the genetic code leading to defective gene function. This genetic variability among patients explains why new therapies have to be designed to address specific defects and why there will be unlikely a “one for all” drug in MDS.

Current studies are focusing on individual defects and aim at clarification of the mechanisms resulting from specific classes of genetic defects. One found frequently in myelodysplastic syndromes involve a group of genes called “spliceosomal genes”. Spliceosomes are structures normally needed for proper production of proteins, including those that prevent and regulate leukemic outgrowth. Among them, one of the newly discovered genes is called LUC7L2. This proposal deals with this gene because it is not only damaged by mutations but also lost in bone marrow cells of patients through chromosomal breaks that frequently occur in MDS.

Thanks to the generous funding from Evans Foundation we have made a lot of progress along the original action plan proposed in our project. We have generated cells growing in the petri dish that carry LUC7L2 defects and were able to determine that the defects in this gene increase the growth rate of leukemic cells. These experiments were then used to study the fundamental mechanisms by which the defects lead to increased proliferation and other proteins that are regulated by the mutant gene LUC7L2. With this knowledge at hand we went on to further investigate whether these LUC7L-regulated genes directly promote disease processes including progression to leukemia. Thus we are currently testing the candidate genes and are exploring opportunities to develop chemicals, which could correct the defects in the LUC7L2 gene and serve as drugs that would be effective in a selected group of MDS.