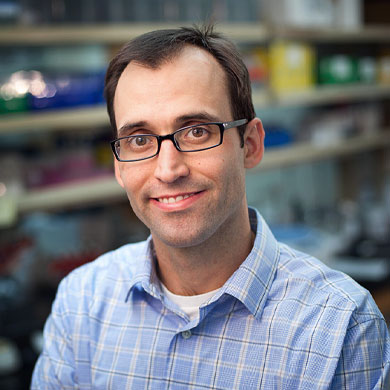 Although myelodysplastic syndromes (MDS) are much more common in older adults, they do happen in children. However, despite sharing a name, there are significant differences between the MDS observed in adults compared to that seen in children. In particular, MDS in childhood can occur within families and this familial MDS commonly is associated with loss of chromosome 7. In addition, many of mutations present in adults are not observed in kids, suggesting that the genetic causes of MDS are different in adults and children.

Our previous work set out to determine these genetic differences. As part of these studies we found that some cases of familial and pediatric MDS are caused by germline mutations in two genes on chromosome 7 (SAMD9 and SAMD9L). These genes are expressed at higher levels after a viral infection, confirming a long-known association between viral infections and bone marrow suppression in children. Surprisingly, we observed that the impact of these mutations is to prevent cell growth and the bone marrow of patients can adapt to these mutations by the outgrowth of cell populations that lack the copy of chromosome 7 that also contains the germline mutation. In short, the MDS cells with monosomy 7 no longer contain the germline mutation. In addition, we have found that cells can also accumulate other mutations that appear to dictate the clinical course of the patient. If patients acquire additional mutations in SAMD9 or SAMD9L, the hematopoietic cells with the germline mutations can now grow again. In contrast, if mutations in other genes occur, the patients can progress with a more aggressive MDS and even acute myeloid leukemia (AML). We hypothesize that being able to identify these different mutations will allow us to predict the clinical course for these patients.

To test this hypothesis, we will use a combination of primary patient samples and a mouse model recently developed by my group that can express a Samd9l mutation observed in kids with MDS. We will fully define the mutational patterns of blood cells that contain these germline mutations with both deep sequencing and single cell DNA sequencing. In addition, we will use this mouse model to understand how inflammation, such as that seen during a viral infection, can influence the growth of cells with a Samd9l mutation. Collectively, the successful completion of these studies will have significant impact on pediatric MDS. Traditionally, the majority of kids with MDS will undergo a potentially curative, yet dangerous, bone marrow transplant. We now believe that some patients may get more benefit from a wait and watch approach without any therapeutic intervention. The data generated by this grant will lay the foundation for future clinical trials on pediatric MDS.