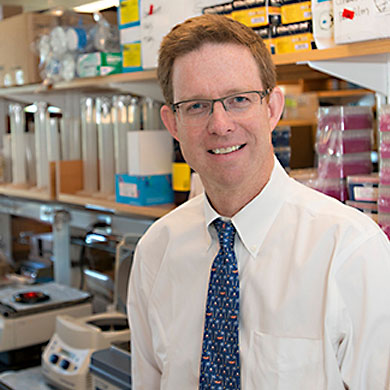 Patients with myelodysplastic syndromes (MDS) are prone to infection, bleeding, and fatigue (as a consequence of low blood counts) and are at extremely high risk of developing acute myeloid leukemia (AML). The currently approved drugs for MDS (azacitidine, decitabine, lenalidomide) can modify the burden of disease in some patients, but the responses are not sustained. The only potentially curative therapy for MDS is bone marrow transplantation, but >90% of MDS patients are unable to undergo transplantation because of advanced age or concurrent medical problems. Clearly, novel therapeutic approaches are needed for MDS. A recurring theme across oncology is that the best path to highly effective therapy begins with a thorough understanding of why cancer develops. Until recently, our understanding of the genetic causes of MDS was extremely limited. In the past several years, we have gained new insights, largely through unbiased sequencing studies (where the order of building blocks in the genome is determined, and mutations–“spelling errors”–are identified). We and several other groups recently made a surprising discovery. In MDS patient samples, we found a high frequency of mutations in components of the “spliceosome.” The spliceosome is a structure found in all cells that modifies RNA. RNA is the “second messenger” that relays instructions from DNA (the molecule that contains our genes, the instruction manual for all cells) to protein (the molecules that carry out most functions within cells). The modification of RNA performed by the spliceosome is called splicing. During splicing, pieces of genes not necessary to direct protein formation are removed. Importantly, the pieces of genes that are important for protein formation are shuffled during splicing. The net result is that one gene can direct the formation of more than one protein. We predicted that mutations in the spliceosome would lead to altered splicing. We now have strong evidence that this is the case, but how (or if) altered splicing contributes to MDS is completely unknown. Further investigation is needed to determine: 1) how splicing mutations contribute to MDS, and 2) whether these mutations represent an avenue for development of novel MDS therapies.

This Programmatic Research Grant application has three projects with distinct, but complementary goals. Project 1 (led by Dr. Matthew Walter, Washington University), will generate novel genetically-engineered mouse strains that express the most common spliceosome mutation that we identified. We will use well-established techniques to determine whether these model systems exhibit the pattern of abnormal splicing that we see in MDS patient samples. Project 2 (led by Dr. Omar Abdel-Wahab, Memorial Sloan Kettering), will perform mechanistic studies to understand which abnormally spliced products are functionally important for the development of MDS phenotypes. Project 3 (led by Dr. Timothy Graubert, Massachusetts General Hospital), will use cell lines to identify an “Achilles heel” that could point towards potential new drug targets for MDS. Any vulnerabilities that we uncover will be tested in human and mouse blood-forming cells to confirm that normal cells are not adversely affected and that the observations are not restricted to cells grown in the laboratory.

Information gained from this project will be shared with Evans Foundation awardees at regular meetings and with the broader scientific community through publications and presentations at national meetings. Tools developed by the project will be made available to other investigators so that advances in our understanding of MDS can be made more rapidly.