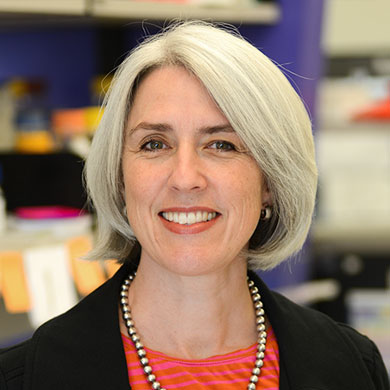 DNMT3A and the Spliceosome in MDS

evelopment of MDS. The Goodell laboratory studies one of these genes, DNMT3A, that is known to be involved in modifying DNA. Even more frequently in MDS, mutations are found in genes that encode factors that control the manufacture of RNA (RNA splicing factors). We have evidence that DNMT3A controls the efficacy of RNA splicing independent of mutations in splicing factors. A large subset of MDS patients with DNMT3A mutations contain a mutation in splicing factors, which raises the question of how these two processes are intertwined at the biochemical level.

Our preliminary studies indicate that loss of DNMT3A in murine and human stem cells results in aberrant splicing, largely through retention of introns. This in turn affects the production of proteins required for normal stem cell function. We find that DNMT3A physically interacts with RNA splicing factors independent of DNA or RNA. In addition, DNMT3A mutant cells displayed increased sensitivity to splicing inhibitors. Since there is no specific or effective therapy for patients with DNMT3A mutations, our work may highlight a potential novel strategy for therapy.

In this study, we propose to determine the modality of interaction between DNMT3A and splicing factors at the molecular level to understand why and how mutations in these two groups of proteins may occur together. This will be critical in revealing novel drug targets and possibly new functions for these proteins. Our second aim is to determine whether splicing inhibition is a viable therapeutic strategy for DNMT3A mutant cells. Splicing inhibitors specifically sensitize splicing factor mutant cells due to accumulation of aberrant splicing. If mutations in DNMT3A alone causes aberrant splicing, we aim to test if these cells in vivo are sensitive to splicing modulators.

These studies will not only reveal a novel mechanistic convergence between DNMT3A and splicing factors, but also will establish the bedrock for development of novel therapeutic strategies for patients with DNMT3A mutations.