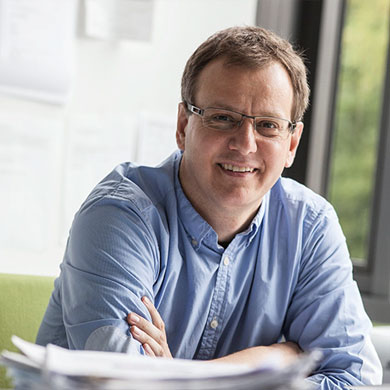 Myelodysplastic syndrome is a blood disorder and primarily a disease of the elderly. Most patients are over the age of 65. About 30-40% of the patients that have MDS will develop another type of blood disease, acute myeloid leukemia (AML). In MDS, your bone marrow, the site where blood cells are formed, does not produce enough functional blood cells anymore. Blood cells are necessary for transporting oxygen in your body (red blood cells), blood clotting (supported by platelets) in case you are injured, and for fighting various types of infections and viruses (done by white blood cells). Blood cells are generated from blood forming stem cells in the bone marrow. Blood forming stem cells are also called hematopoietic stem cells (HSCs), and the process by which they form blood cells is called hematopoiesis. In MDS, these HSCs do not work properly anymore, and can usually not produce certain types of bloods cells anymore. This is called a cytopenia. Anemia (low red blood cell counts), neutropenia (low white blood cell counts), and thrombocytopenia (low platelet counts) are the major types of blood cell cytopenias. The remaining blood cells circulating in the blood may in addition also not function properly as they have an abnormal shape and appearance, or morphology, of a cell, which is called dysplasia. Finally, the prefix myelo- means marrow to indicate that MDS is a disease that starts within the bone marrow.

MDS can also be a consequence of chemotherapy or irradiation treatment of usually solid cancers. In the process of the chemo/irradiation therapy, some HSCs are in a way altered in response to the treatment that will over time convert them into a stem cell that will results in MDS. This type of MDS is called therapy-induced MDS or t-MDS, and it is assumed that about 20% of all cases of MDS are actually cases of t-MDS. While only a very small percentage of people that received chemotherapy or irradiation therapy will ever develop t-MDS, there is evidence that these people might have a genetic predisposition to develop MDS in response to chemo/irradiation therapy. This means that HSCs from these people might respond to chemo/irradiation therapy in a very special way which then renders the HSCs dysfunctional. We were wondering in our project whether it might be possible to generate an animal model system that allows us to study the development of t-MDS in mice. First results from our project demonstrate that if we alter the genome of HSCs of mice in a very special way (called retroviral insertional mutagenesis) and then treat animals with irradiation therapy, most of the animals develop a disease very similar to human t-MDS. This mouse model is to the best of our knowledge the very first animal model system for t-MDS. The special way we alter the genome of HSCs does also allow us to identify likely changes in genes that might predispose these animals to t-MDS, and we already got a list of 10 such factors. 2 of them have already been shown to be affected in MDS in humans, and are thus very likely changes that might support initiation of MDS in patients that underwent chemo/irradiation therapy. We propose in this project to test whether our candidate genes actually are genes that predispose to t-MDS, and whether they might be associated with t-MDS in humans. If our hypotheses prove to be correct and thus some of these genes are pre-disposing factors, we might be able to inhibit their influence when people will get chemo/irradiation therapy to further reduce the risk of t-MDS are at least will be able to monitor patients more closely with genes pre-disposing them to t-MDS which might results in an earlier and thus more successful intervention in case they start to develop MDS.