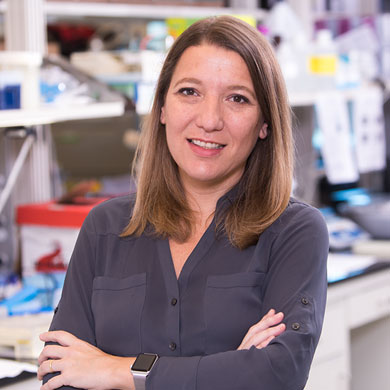 Myelodysplastic syndromes (MDS) are a group of malignant disorders of the blood in which the bone marrow fails to produce sufficient mature blood cells to meet the body’s requirements for oxygen transport and fighting disease. Over time, MDS can evolve with worsening of this bone marrow failure or can transform into a more aggressive acute leukemia, both which of carry a high degree of mortality. MDS originates in the hematopoietic stem cells in the bone marrow, which normally give rise to all mature blood cells. In order to function properly and perform their specialized functions, different cells must express specific genes in a controlled manner. This process is regulated through the function of specialized proteins such as epigenetic modifiers and splicing factors. Epigenetic modifiers are a group of proteins that help control which genes are expressed at which time in the cell’s life cycle. They do so by adding chemical labels, such as methylation, to the genetic material (DNA) of the cell. Splicing factor proteins, on the other hand, help determine which of the available “building blocks” (exons) of a specific gene are used at any given time, so that when different blocks are chosen, different forms of that gene are expressed, thus adding an extra layer of regulation.

In MDS, hematopoietic stem cells frequently acquire mutations in epigenetic modifiers and splicing factors, and these mutations can sometimes co-occur. Interestingly, we have found that combining mutations from these two classes of genes together drives MDS development. Notably, despite the fact that splicing factors do not play any role in the way that DNA methylation is deposited on genes, our preliminary findings indicate that mutations in these factors are associated with very strong changes in the distribution of DNA methylation in the genome of MDS patients. Moreover, co-occurrence of epigenetic and splicing factor mutations resulted in more profound abnormalities in the patterns of DNA methylation than either mutation alone.

The above findings indicate that mutations in epigenetic modifiers and splicing factors interact to produce a more aggressive disease, with more pronounced abnormalities at the gene expression level. However, the precise mechanism by which splicing factor mutations result in DNA methylation abnormalities, as well as the extent and characteristics of this abnormality are not yet understood. Furthermore, little is known of how co-occurrence of these mutations affects response to hypomethylating agents, the only therapy currently available for MDS patients who are not eligible for bone marrow transplant.

In the current study we propose to use a combination of cell lines, mouse models, and primary human MDS specimens to fully characterize the epigenetic, RNA splicing, and gene expression changes associated with mutations in epigenetic regulators and splicing factors and evaluate how changes in DNA methylation may affect the function of splicing factors. We will also explore how these mutations impact response to hypomethylating agents. This type of mechanistic insight is essential in order to better understand how these mutations drive the initiation and progression of MDS in patients, so that novel therapeutic targets can be identified that can be exploited in future studies.