DNMT3A and Telomere Dysregulation in Clonal Hematopoiesis and MDS

Myelodysplastic syndromes (MDS) are blood diseases that occur when the blood-forming hematopoietic stem cells (HSCs) in the bone marrow become abnormal. This leads to reduced production of one or more types of blood cells. MDS is considered a type of cancer, and significantly impacts patient’s health and lifespan. At least 20,000 cases of MDS are diagnosed in the USA per year. There are only three approved treatments for MDS, but these existing therapies (which cost in excess of $120,000 per patient annually) do not cure the disease. New strategies for the treatment of MDS patient as well as methods to potentially prevent at-risk individuals developing MDS are urgently needed.

HSCs live in the bone marrow and are responsible for life-long regeneration of the blood system. Through a variety of processes, HSCs acquire random genetic mutations as we age. Most mutations have no effects, but sometimes the mutations occur in critical genes which are required for the normal activity of the HSC. Such mutations then provide that cell with a growth advantage compared to other HSCs and the mutant cells overtake the bone marrow. This situation is called clonal hematopoiesis (CH) and is a common condition in the elderly population. While CH itself is not a pathogenic condition, people with CH are predisposed to the development of blood disorders such as MDS. Understanding how these mutations in HSCs lead to CH is important for deciphering the genesis of MDS (and other human diseases), and for developing new methods of treatment and prevention.

Many mutations which provide HSCs with abnormal growth in CH are also driving forces for development of MDS. The most recurrently mutated gene in people with CH encodes a gene called DNMT3A, which is also one of the most frequently mutated gene in MDS patients and is regarded as a driver of the disease. DNMT3A mutations in HSCs lead to increased “fitness” or “competitive advantage” over wild-type HSCs. This means they grow faster than normal HSCs, resulting in them dominating the bone marrow and blood.  We use mouse with genetic modifications that mimic the DNMT3A mutations found in humans to study the effect these mutations have on blood cell function. We have found that these mutations greatly extend the lifespan of HSCs, allowing them to survive far beyond the normal limits. Normally, HSCs have restrictions that limit their lifespan, one of which are structures on the end of chromosomes called telomeres. Telomeres are repetitive DNA sequences found at the end of chromosomes that serve as a cap to protect the ends of the chromosomes from DNA damage.  However, telomeres get shorter every time a cell divides because the enzymes that copy the DNA cannot fully replicate the very ends of the chromosomes. When telomeres become reduced to a certain threshold, HSCs cannot function any more and either die or become dormant. We have found that HSCs with mutations in DNMT3A are able to overcome this barrier of telomere shortening to allow them to live forever. The DNMT3A protein has not previously been regarded as part of the machinery that regulates telomere length in HSCs. However, our new data indicates that DNMT3A normally serves to limit the replicative lifespan of HSCs (perhaps as a safeguard to protect them from acquiring pathogenic mutations) and that when the cells mutate this gene, they are able to persist and gain clonal dominance. This appears to be one of the first steps to development of MDS, as DNMT3A mutations in MDS patients are also associated with longer telomeres. This is an exciting new finding because it presents a new avenue for treatment of these patients. There is a molecule called Imetelstat that can inhibit the telomerase complex which extends telomeres, and is in clinical trials for MDS patients.  But to date, there is no understanding for which patients may benefit from Imetelstat therapy.  We have identified a potentially novel link between DNMT3A mutations and telomeres, and the goal of this proposal is to use our unique experimental systems to solidify this link so that MDS patients with these mutations can be prioritized to benefit from this treatment. 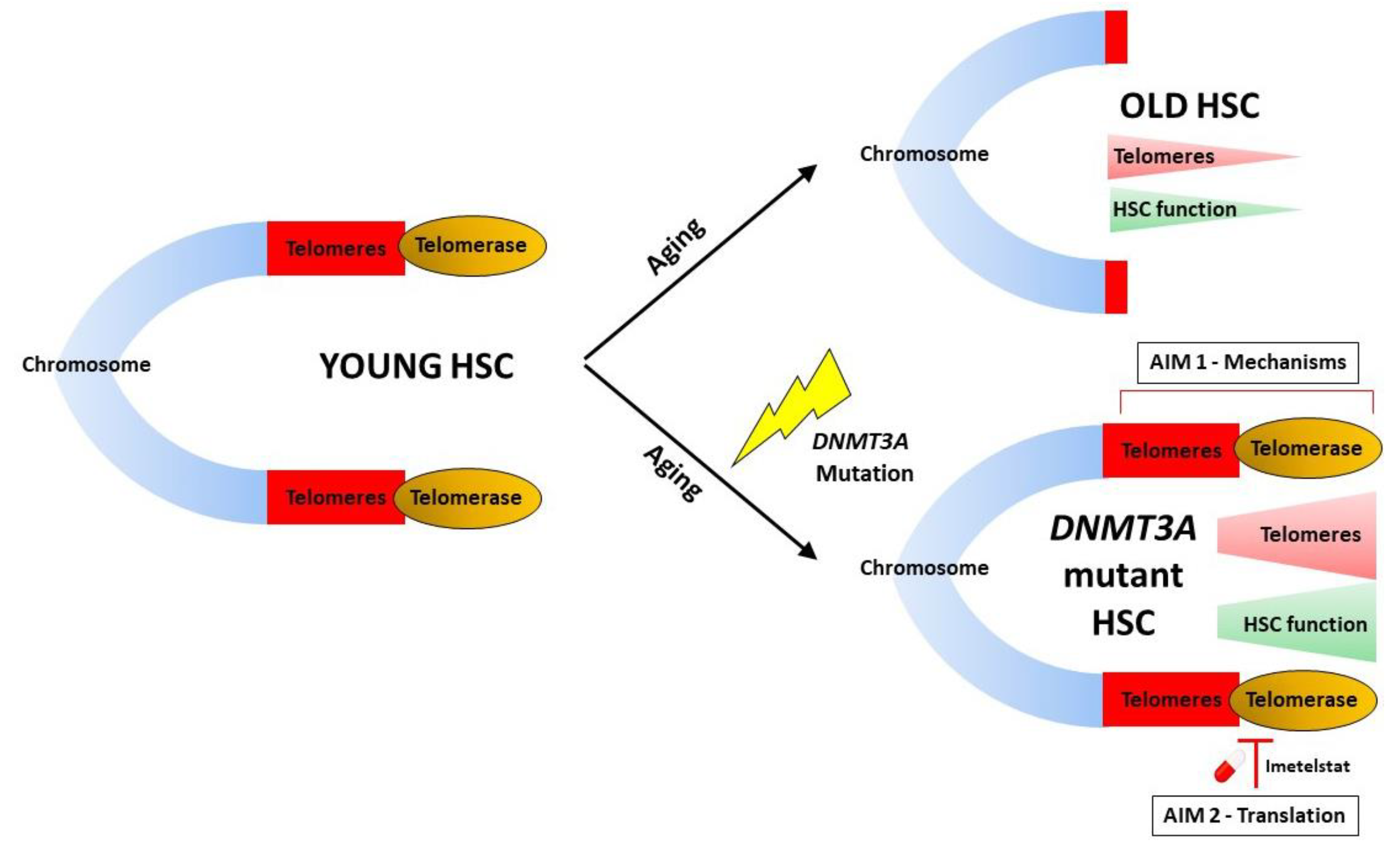