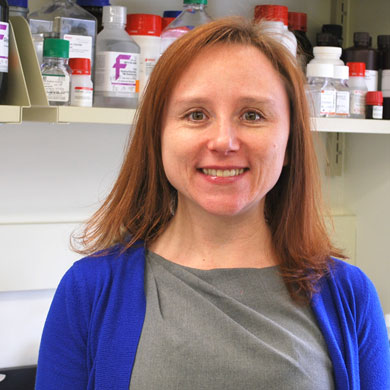 Finding new therapies for MDS through chemical screening in zebrafish

Myelodysplastic syndromes (MDS) are a group of pre-leukemia blood disorders associated with low blood cell counts. MDS afflicts patients of all ages, but the prevalence is markedly increased with age with most patients being older than 60-years old. According to the American Cancer Society, approximately 13,000 cases are diagnosed in the United States each year, although the numbers are rapidly growing as our aged population increases. The best treatment option for MDS patients is bone marrow transplantation, but many MDS sufferers are poor candidates for the procedure due to the lack of a matched donor or additional health risks that make the treatment more dangerous than the disease. One of the main hurdles to development of improved therapies has been the poor understanding of the origins of MDS. Recent work has uncovered several new factors that are commonly mutated in MDS that might be the driving force behind the disease. Understanding how these factors affect blood production will not only provide invaluable insight into the underlying cause of MDS, but they might also be good candidates for development of new targeted therapies. One of the most recurrently mutated factors in MDS is SF3B1, a component of the pre-messenger RNA splicing machinery. We have uncovered several blood defects in zebrafish and mice with mutations in SF3B1. The zebrafish is an ideal model to employ for genetics and drug discovery. Some of the advantages of using zebrafish for these studies are easy and high-throughput capacity for genetic manipulation, ability to generate 100-1000s of animals per week, and a high degree of genetic and cellular conservation with humans. Employing these advantages, we plan to perform a chemical screen to find drugs that could be used to treat MDS. We aim to identify two classes of drugs: 1) those that preferentially kill sf3b1-defective cells and 2) those that restore normal blood production in sf3b1 mutants. Either modality could alleviate symptoms in MDS. We then plan to test the identified drugs in a pre-clinical murine model of SF3B1 dysfunction that closely resembles the human disease. The model has already been used successfully to demonstrate that a splicing modulating drug shows selective toxicity for SF3B1-mutated cells. By performing the drug tests in animals rather than in cells, we will also uncover potential negative side effects of drugs on normal cells and other tissues, which can help select for better therapeutics at the pre-clinical stage and thus expedite the time to the clinic. Through our proposed studies in these two model systems, we will gain in vivo insight into the relevant pathways downstream of SF3B1 for healthy blood cell production and identify novel targeted therapeutics for the treatment of MDS. 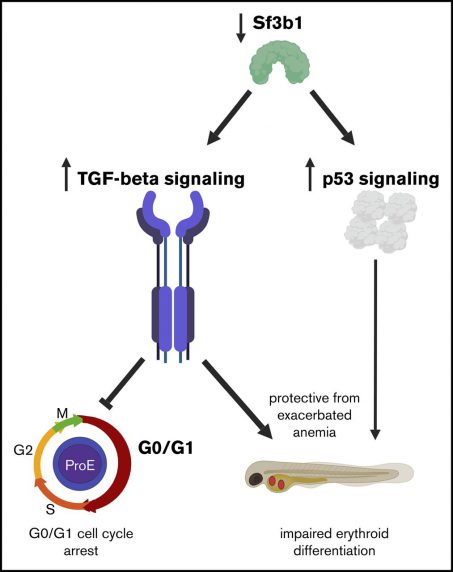